If you’re in the search for a new movie this is the right place 🙂 My selection is random and the details are minimum. Is it going to help you decide what’s next on TV? Maybe no but I’ll work in time on my delivery.

I always wanted to write movie reviews but my short memory doesn’t help. So I’m bringing you 6 short options for random movies and TV shows. Sometimes they’re gonna be good, sometimes not (both movies and reviews). I won’t write only about new movies, I’m pretty behind with the releases and things don’t always catch my eye.

I’ll always add that I have no connection to TV Time but this app changed my life. You can add your shows and movies, see when the next episode is aired, and connect with other people. There is a comment section for every episode and for the show in general. You can also follow other people or check your watch-time and a graph of your favorite genres.

Watched it recently and I have to say that I was mind blown. At the one-hour mark, I was thinking how can they keep ongoing since it looked almost finished and kinda boring. But plot twist after plot twist and it ended up amazing. Such a beautiful and sad love story, in the end, I felt bad for everyone. Just amazing.

From the name you get the idea that it’s not going to be the same old story we all know. It’s not everyone’s cup of tea but if you’re into dark aesthetics it might work for you. The scenes were beautiful but it just felt empty. I don’t know if something could make it better but I don’t regret watching it and seeing a different interpretation of the classic.

Only watched it for Keanu Reeves. Worth it. It’s not something I would usually go for but I liked it.

I really like horror movies, they’re my first choice when I’m searching for something to watch but sometimes I don’t want to be traumatized and I go for something lighter. Even though they are also comedies they still kept me glued to the TV, anxious about what is going to happen next. It’s good to watch when you have nothing better to do.

I’ll end this list with something a bit heavy. Whenever I see ‘based on a true story’ I’m hooked, and it didn’t disappoint. I researched the story more and I also want to read the books Natascha Kampusch wrote. I don’t recommend however if you’re triggered by kidnapping or assault stories.

One season with 8 episodes, just a longer movie in a free day. It’s based on the novel with the same name written by Stephen King. Interesting story and made me sad it was so short. Thinking of rewatching it one day but my to-watch list is too long lol. Worth it.

It took me a few days to finish it because I’ve been a bit tired from work but finally made it.

SF movies aren’t really my kind but I thought if it’s starring Keanu Reeves it should be good. And I wasn’t wrong.

There are scenes when your heart breaks for the things going on but sometimes you’re just asking yourself why? Some decisions were questionable and would have made the movie so much shorter with fewer problems along the way 😂 while some on the other hand we’re more than you wished for.

I cried a bit because you feel the pain the character is going through, you understand the desperation as a parent and how hard are the choices he has to make. It was amazing seeing a scenario that could become reality in the future but it’s also sad thinking about the power some people have and how they’re using it.

I watched it as someone who doesn’t know what’s behind the movie but it was so great that makes you want to know more. I’ll definitely read more about the true story of these strong people. The acting was amazing, it makes you root for them and hope for the best. I’m glad everything turned out good for them but I can’t help but to hate the judge. I think everyone who watched it did.

Everything you want from a horror except the trauma. Jump-scares, blood, people dying and a creepy story. I was expecting a cheap looking movie but I was proven wrong.

I love watching or reading stuff about Chernobyl, I also want to go on a tour one day if they’ll still be available but I can’t say I loved this. I feel like they took the story and just decided to make something up while taking advantage of the name. The movie could have taken place in an apocalypse and it would have been better. It gave me I am Legend vibes in a way.

Watched it a few times and loved it every time. One of the few Brad Pitt movies from my list but can’t imagine someone else in this role instead.

Emma Stone and Jonah Hill are a match made in heaven. I love short tv shows since they’re so easy to finish but they also leave me wishing for a second season. You can never please me :))

This week we’re looking at some shows because I have more of them in my list. I already finished 3 from this list this week, I’m trying to find shorter shows otherwise I won’t have anything to write about lol. I’m also watching a movie while writing this so I don’t fall behind on my lists.

I like these short documentaries from Netflix. You get some really cool information you wouldn’t otherwise search for. I want to watch more of these, they are entertaining and educative.

I read that there are also a book this is inspired from, a movie and a cartoon. Talking about an amazing story. The graphics we’re so cool, I usually don’t like animation movies but I wanted to watch this because I love bunnies. Only 4 episodes but I cried for all of them. Even though it may be a little traumatic for kids I definitely recommend it since it teaches how animals have souls and feelings too. It’s a bit sad to realize that animals are better than some people. Even though it’s a sad journey it also has a happy ending ( I cried then too ffs)

Light comedy, nice to have something to watch while chilling.

Horrible. I only finished it because I can’t stop myself. Stupid characters but otherwise interesting story. There we’re some scenes pretty good but not worth watching the whole show just to wait for them. Wouldn’t recommend even when bored.

Must-watch. New season started a while ago and can’t wait for the next episode. The actors, the story, shots, everything is beautiful and made to keep you glued. It’s sad when you think about all the women who don’t have equal rights and unfortunately the world is not so far from a scenario like this being real life. We may have advanced a bit but in some ways and some countries the difference is little to none. Let’s hope the future holds freedom and equality between people, no matter gender, race or sex orientation.

I’m a huge Eminem fan. Watched it a few times and I think I have to watch it again. My mom was the one who made me listen to Eminem when I was little and she also told me about this movies. I used to search lyric videos on YouTube so I could understand what’s going on since I was also starting to learn english but music and cartoons helped a lot. I still have trouble listening songs if there is a video too. I usually watch the video and then listen the lyrics otherwise I just hear random words and nothing makes sense lol

It’s been a while since I wore something different than work clothes or hoodies but I’m slowly transitioning to the warmer weather. I even forgot how much I love flannels. I’ll be having a blast taking them out of storage.

I have to go thrifting and find some new black fitted t-shirts to wear under since all I have now is either too small for me to be comfortable with or too baggy to be worn under something.

It’s such a shame I ruined my Nikes at work but I’ll find a way to restore them. I also had to wear my new Fila bag even though the smell is pretty awful lol

I’ve been doing my own nails for a few years on and off now but from now on I want to put more dedication. This set took me less time than usual, this is a good thing since I can waste a few hours because I take food breaks, movie breaks, Instagram breaks and so on lol. Didn’t remove all the old color, hoped the new one will be pigmented enough but it was the first time I tried it. The glitter is also a new purchase so I had to try it out.

The extension is made with polygel and I only use it when I break a nail, need an apex or a really good fill. Otherwise, for a regular monthly fill or just leveling the nail I use my base or old no-name brands that I want to get rid of.

Don’t forget to drop by and say hi!

Don’t forget to drop by and say hi! 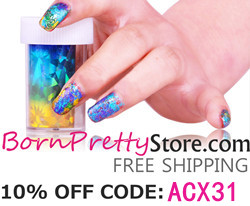